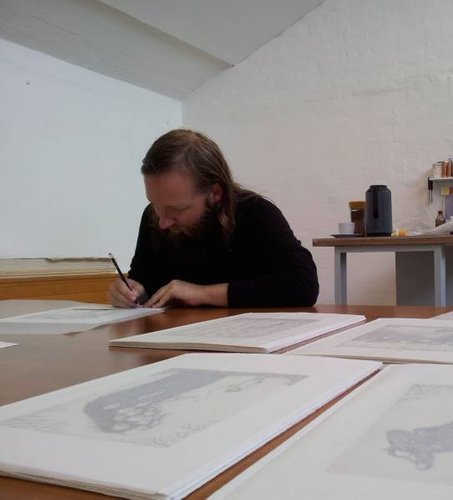 JOHN KENN MORTENSEN has a vast experience within comics, TV–production, filmmaking and illustration. John Kenn Mortensen’s breakthrough as an illustrator came in 2012 with the book ‘Sticky Monsters’. In this book, as well as in its sequel ‘More Post-It Monsters’ and his more recent works Mortensen embraces the dark universe of bone-chilling monsters mixing the horror with humour. These highly imaginative ghastly scenarios have made John Kenn Mortensen into an idol of an international crowd of entusiasts. His followers feed not only on his books and drawings, but also on vinyl figures and T-shirts with the representation of John Kenn Mortensen’s iconic monsters.

Not fitting with a certain ‘jargon’ and code of conduct John Kenn Mortensen feels like a misfit on the Danish art scene. Therefore, his work, so he says, becomes a form of salute to the misfits of the world.

FLY ON A STICK

Fly on a Stick is John Kenn Mortensen’s first and only intaglio project. In producing the motives John Kenn remained true to his artistic practice working without any preparatory sketches. John Kenn was simply letting the motives “form themselves” through concentrated work with the etching needle directly on the wax covered copper plates. The motives of those etchings might scare the viewer at first, but the fascination with John Kenn’s drawings distracts us, allowing us gradually to learn to know and love the harmless monsters.

- John Kenn Mortensen  (b. 1978) is an artist, a writer and a movie director. He was the 2012 winner of Pingprisen as the Best Danish Debut for his book ‘Post-It-Monsters’. 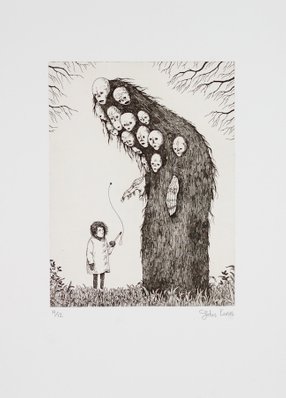 (click on the image to see the entire series)