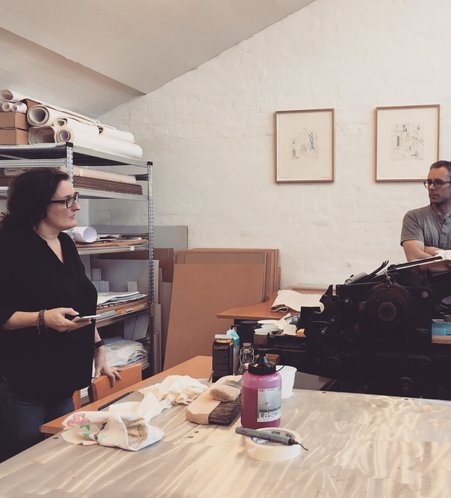 ERIN LAWLOR is known for her masterly use of oils ‘alla-prima’ and her palette of juicy bright and sombre dark colours. She is capable of transcribing the sum of moments into lines, forms and colours with a single movement of the broom-like brush she is using. Lawlor’s relation to the canvas becomes intensely physical as the creation of a single painting assumes the form of documentation of the artist’s work process. Her works constitute the record and the sum of movements translated into the dynamics of oil colours on canvas.

The suite of moments that builds up to a single brushmark brings also the volume into the otherwise flat surface of the mould-made paper in Erin Lawlor’s first etching project. A fragile point of equilibrium between control and the accidental form together a moment frozen in time and yet it feels like it is reenacted by the spectator time after time.

The paper sheet becomes a cast of the grooves and indentations of Lawlor’s etched plate when it ran through an etching press. The contrast between the bright and the dark areas transforms the negative space of the background into a sculptural interplay between solid form and emptiness. Thus the single gesture of an experienced hand introduces light into darkness and space into flat support. The result is a fundamentally open image that aspires to signify rather than show.

Erin Lawlor herself prefers to define her work as non-figurative rather than abstract as she shares, the American scientist, David Bohm’s idea of a never static or complete reality seeing it rather as an unending process of movement and unfoldment. 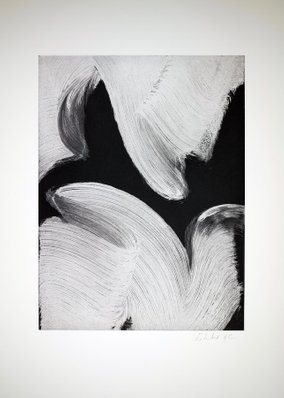