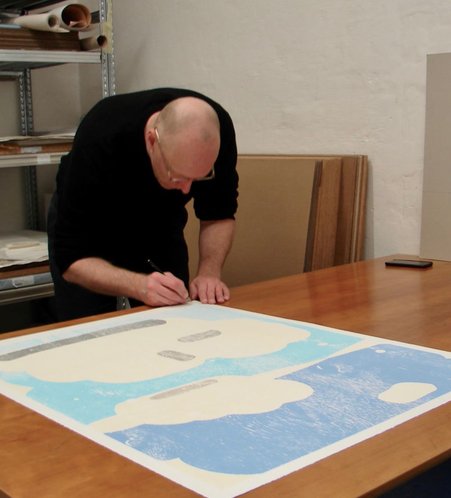 MORTEN BUCH’s choice of subject is rather arbitrary, he is more concerned with the possibilities it offers him on the associative plan rather than with its significance. Intrigued by the different characters his motives assume, the artist often chooses to make more versions of the same subject. It is this perpetual work on the same motives that placed Buch among the Neo-pop artists.

His most recent work bears traces of digital aesthetics. Those simplified forms can, on one hand, work as representations of the real world while on the other go towards an abstract dimension. Recognized as part of popular culture in the West Buch plays with the idea of using those emojis like aesthetics as a way for visual communication with his audience.

Though painting remains Morten Buch’s primary media over the years he also worked with different printmaking techniques. To make his large-format woodcuts Buch used a method developed by Edward Munch. The iconic Norwegian artist used a jigsaw-puzzle method for simultaneous printing in different colours. He would cut elements out of the block and have them inked separately before putting the pieces back together prior to printing. Morten Buch used this method when invited by our studio to work around the production of a series of high-prints in 2018.

His series of woodcuts that he chose to call ‘Signs’ is characterised by strong materiality. To accentuate even further the materiality of the wooden blocks, they were carefully brushed with a metal brush to bring forward the wood structure in them. While exploring the media’s materiality Morten Buch investigated also the aspect of space that fascinates him in his work with ‘bigger than life’ objects.

- Morten Buch (b. 1970) is represented by Galleri Susanne Ottesen, Copenhagen. 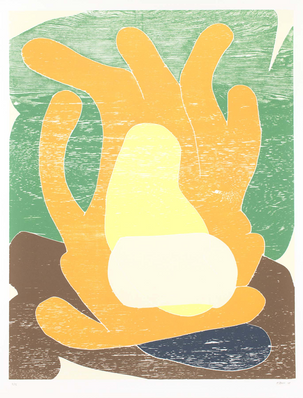