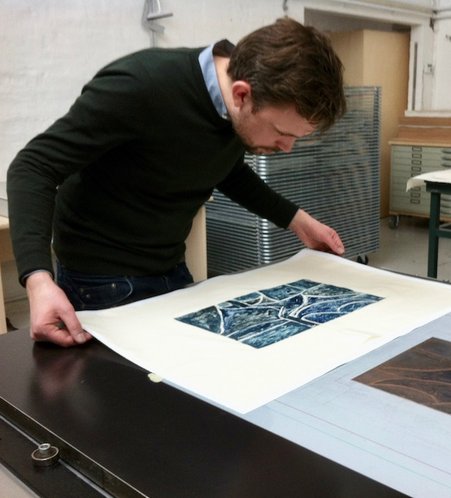 MATHIAS MALLING MORTENSEN’s artistic language is purely abstract. Without formal art training, he formed his artistic interests by observation. Surrounded in his childhood by the works of his famous grandfather, the Danish artist, Richard Mortensen, Malling Mortensen nourished his interest in art through an interest in the oeuvre of his grandfather and his grandfather’s inspiration sources: Kandinsky and Miro.

Preliminarily drafts are always the starting point of Malling Mortensen’s work in which he, however, seeks to achieve a sense of spontaneity. He often works on the same motive more times playing with the composition by changing the format of his canvases.

There is a sense of rhythm in Malling Mortensen’s works. Looking long enough at his canvases a subtle ear might start to hear the jazz’s irregular rhythms overlaid with music. The sequence of colourful shapes in Malling Mortensen’s compositions sustain in us the idea that his works are a study of the intersection of music and art.

Malling Mortensen’s series of 12 monotypes deepened the artist’s delicate investigation into materiality. By using the canvas rather than paper for those graphic works Malling Mortensen was able to show the brushmark with which he built his compositions, keeping a sketch-like freshness. Running the oil painted copper plate, through the press allowed the colours to mix and merge in a new way. The hybrid nature of the project plays with the ambivalence between the use of a traditional printing technique and the unorthodox approach to the choice of canvas as the work’s media. Stretched on a stretcher and framed the spectator is invited to look at a graphic work presented as a painting.

- Mathias Malling Mortensen (b. 1980) is represented by Sunday-S Gallery, Copenhagen. 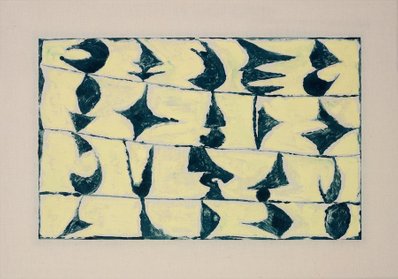